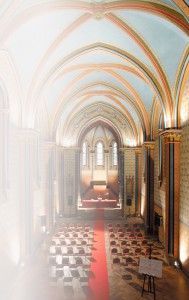 The Sacre Coeur Chapel is situated at the site of the former convent and boarding school of the Ladies of the Sacred Heart of Jesus by the Church of the Lord Jesus Christ. In 1872, Josefina Goetz, the head of the nuns of the Sacred Heart of Jesus Lord, bought the mansion and rebuilt it to a new nunnery with a chapel there. The premises served as a finishing school established in the French style for girls from wealthy families.
At 1882, the foundation stone was laid for a new cathedral built in the Neogothic style after P. Ghislain Bethun, an Emmaus/Beuron Benedictine. The construction of the Sacre Coeur church was undertaken by Ferdinand Zehengruber. The church was completed and consecrated in 1884.
Subsequently, the interiors were also finished and the murals were painted by the Beuron artists. The objects of reverence were the remains of Flavia Victoria, a Roman martyr. These remains were donated to the congregation by the Empress Maria Anna and were placed in the crypt.
At the end of the 20th century, the reconstruction of the church was commenced and the interior of the church was restored to its original state.
Nowadays the Sacre Coeur is not used like the functional church any longer and usually is used for the civil wedding ceremonies, vow renewals or wedding receptions.

Wedding packages at the Sacre Couer — from 1520 EURO:

The wedding package does not include: